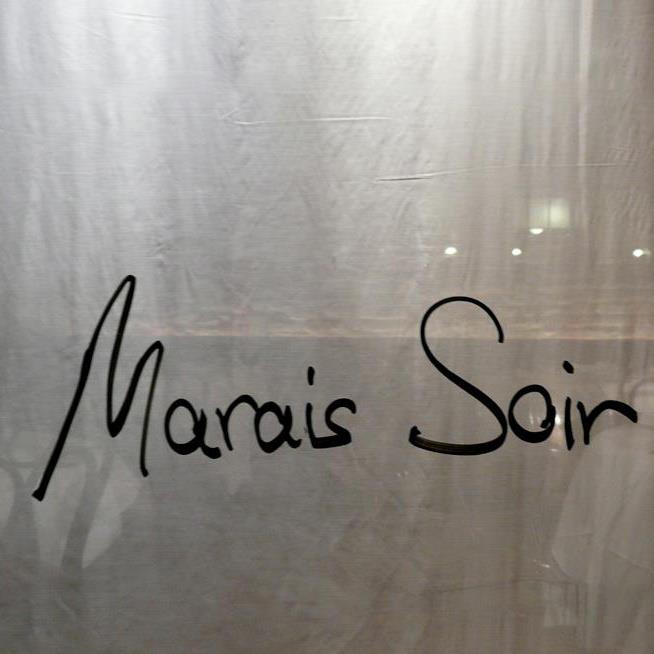 I celebrated my birthday on Friday, and spent the day in my favourite spa in Bavaria – the monte mare sauna in Tegernsee. When I got back, I headed out for dinner with F. to Marais Soir, Cafe Marais’ recently opened French restaurant. I’d been longing to go since it opened, late last year, but there hadn’t been an occasion special enough for it. My birthday was as good an excuse as any.

As with Cafe Marais, a lot of thought has been put into the interior design, and it’s a lovely mix of very modern and yet cosy traditional. We chose to sit in the back corner, in the little romantic cove with completely black walls.

Jocelyne, a French lady who knows her wine, came over to offer us an apéritif. We both chose a Crémant, and spent a good while studying the menu. There’s not an awful lot on it, but everything sounded so appetizing – octopus, monkfish, rabbit…I think there was nothing on the menu I wouldn’t have eaten. In the end, we both chose the four course menu instead of ordering à la carte.

Jocelyne dissuaded us from choosing the French pinot noir to go with it, and instead recommended a pinot noir from the Rheingau. It was very full-bodied and simultaneously very drinkable, and perhaps the reason I had such a sore head the next day!

First up, we were treated to an appetizer from the kitchen – a veal roulade on a bed of ricotta, served with fresh, crunchy baguette slices. And then, the starter – we had scallops, on a bed of orange lentils, served with an avocado cream and a homemade potato chip. I adore scallops, but they can so easily turn rubbery – but these were perfect. By far my favourite course of the meal. Next up was homemade melt-in-the-mouth gnocchi with black garlic and shrimps. The main was two pieces of parmesan-brioche crusted steak, served with runner beans and mash. And then, the dessert. Oh, the dessert.

So, the dessert on the set menu was a quark dumpling with plums. I thought that having managed three pretty hefty courses before this, a dumpling would be way too much. As such, a coconut crème brûlée seemed like a wonderful idea. Look at it, doesn’t it seem like a good idea? Unfortunately, I’d underestimated the amount of sugar and dairy involved in a crème brûlée. It was delicious, and something drove me to finish it, but this was a mistake. I waddled home, thankful for the cold night air.

A word of warning – make sure your stomach is completely empty when you head to Marais Soir for dinner, you’ll thank me for it.