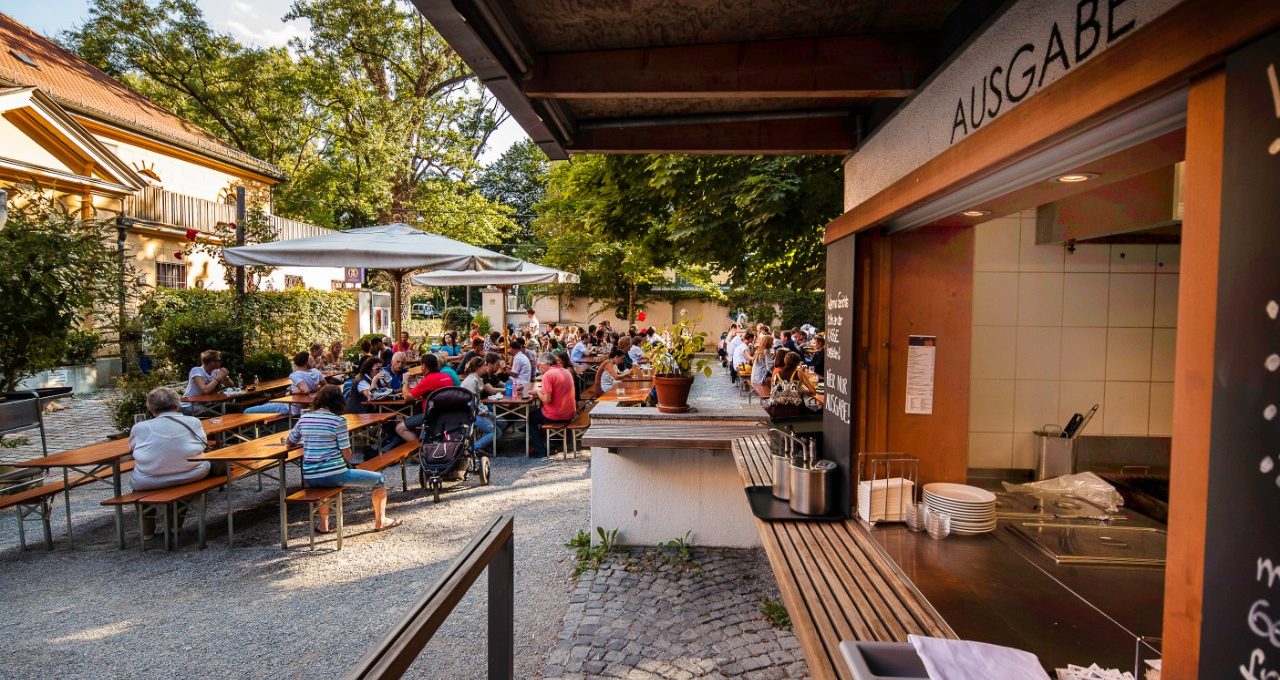 This column has been dormant for a long time. Between lockdown and having a baby (who is almost no longer a baby – time has flown), things were pretty quiet on the events front. But Munich cranks into gear again, doors are opening, beer is flowing, and music is being made. Here’s a romp through what’s on this week in the city…

The Muffathalle hasn’t opened its doors again – current regulations permit seated events of up to 100 persons and besides that, artists aren’t able to travel as freely as they could. The Muffathalle team recently spoke of their financial difficulties during this time – you can read more in the SZ about their struggles. You can still support the lovely venue in a small way – its beer garden (Munich’s first organically-certified beer garden!) is open and they have DJs from Wednesday until Saturday. See who’s on the line-up here.

As for drinks, there are plenty of places to quench your thirst: The Kulturstrand is now back at Corneliusbrücke. On Monday, Munich-based DJs Uschowa will provide music. Bahnwärter Thiel opened their Prosecco Retreat last month and they are open daily, as long as it’s not raining. They also do some great food, and their samosas come highly recommended.

Tuscan-style Villa Flora has also transformed their outdoor area into a rather charming beer garden and open-air cinema. Pop by for lunch or visit late Saturday afternoon for a Steckerlfisch.

You have until the end of the week to check out the Kunstverein’s Emanuel Almborg exhibition in its windows (or online!). I’ve watched it, and it’s a remarkably interesting film about the Suffolk Summerhill School, a “free” school, whereby education fits the child, rather than the other way round. It was opened in 1921, and back then, lessons were optional – there’s more in this fascinating Guardian piece. The Swedish artist used archive material to make the film, which is still open today.

The Kunstverein is also exhibiting work by Pati Hill until mid-August, and you can email them to organise a tour (they are doing tours with up to 4 people at a time).

The Museum Brandhorst is another place closing an exhibition this week – their celebration of a decade of the Brandhorst, Forever Young, will end on Sunday.

On Tuesday, the Haus der Kunst will hold a curator’s tour (in German) on the Franz Erhard Walther exhibition, Shifting Perspectives. Only 9 people can take part, so it’s a chance to enjoy an intimate tour with curator Jana Baumann.

At the end of June, the Espace Louis Vuitton opened a new exhibition featuring South Korean conceptual artist Anicka Yi. Flavor Genome is a 3D projection displayed in conjunction with a piece by the iconic Trisha Donnelly. Yi’s piece explores the union of plants and animals, and was shot in the Brazilian rainforest and a scientific laboratory. Meanwhile Donnelly’s manipulated, sci-fi images resemble living, beating organisms. It’s a look at nature, at our senses, and at how technology influences the natural world. Entrance is free from Monday-Saturday.

I have heard great things about the Thierry Mugler exhibition in the Kunsthalle. The exhibition run has been extended until the end of August, and I hope I can make it before then. Just FYI – half-price tickets used to be available on Mondays, the Kunsthalle has now changed this to Tuesdays.

Import Export has also reopened its doors, and you can catch the Singer Songwriter evening on Wednesday – it’s all outdoors, in a very relaxed setting.

So there we have it: drinks, music and art. It’s almost like a pre-corona Next Week in Munich!

2 comments on “Next Week in Munich – beer gardens, open-air cinemas and DJ sets”