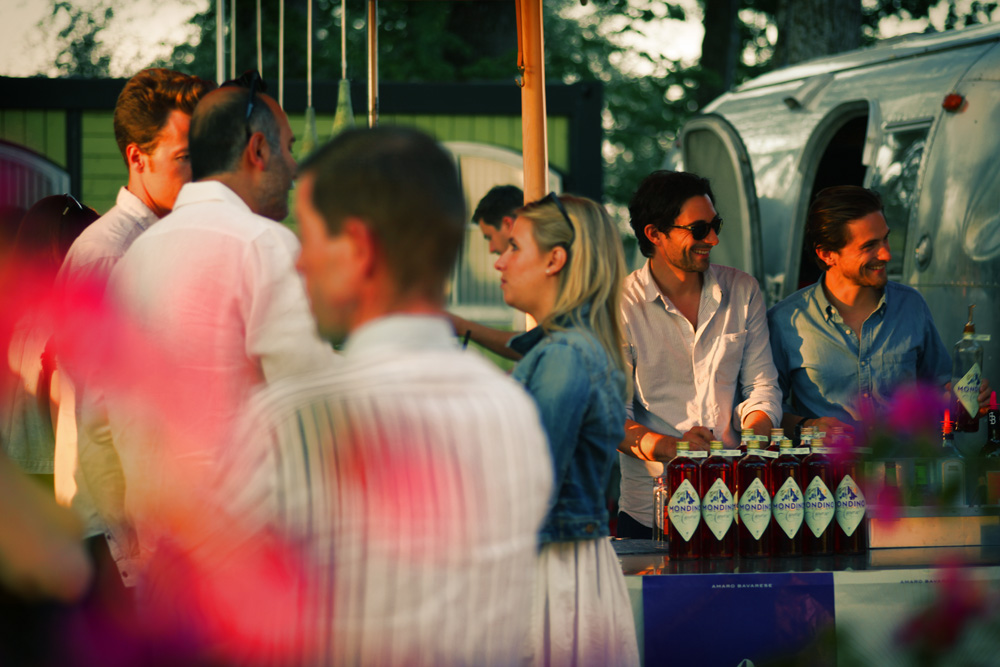 Sasha first told me about Mondino, a Bavarian aperitif liqueuer, similar to Campari (but better), over a long evening in the Viehhof beer garden. The idea of an amaro Bavarese piqued my curiosity – and I went out and bought a bottle the next day. It’s a refreshing, regional and organic aperitif liqueur made in small batches by a young and passionate team in Traunstein, close to the Chiemsee. It’s delicious served with tonic and plenty of ice or in an Americano and goes extraordinarily well in a spritz on a balmy summer’s eve. I caught up with Benedikt from Mondino to find out how Mondino came to be.

Tell us a little about yourselves – and how you came to create an amaro Bavarese.

The Schnitzer family has been producing artisan spirits and liqueurs for over a hundred years. Three years ago, we came up with the idea to reuse an old recipe from the master distiller Hans Schnitzer. Hans learned his trade in the sixties in Italy, and he brought several liqueur recipes back over the Alps to Traunstein. Among others, one of these was a recipe for Mondino – and we’ve taken high-quality organic produce and reinterpreted it. The “Amaro Bavarese” from Hans was similar, but was only created for family gatherings, as the manufacturing process is complex and costly. We found the uniquely fruity taste of bitter orange, rhubarb and gentian too good to just share with friends – especially as Mondino is also superb mixed with ginger beer, tonic or prosecco.

All of your ingredients are organic – are they also regional?

Ensuring all of our ingredients were organic was very important to us. Over the past three years, the “new generation” has been involved in the company, and we’ve worked on converting the entire production chain to use organic ingredients. We also try our hardest to ensure that the ingredients are regional, where possible. Of course, this isn’t always simple – in Mondino, bitter oranges are the main ingredient. Who knows, maybe at some point we’ll be able to grow them well close to the Chiemsee, but for the time being we source them from the Amalfi coast or Spain. The rhubarb is locally grown, and many of the herbs and spices come from the Alps.

There’s currently a positive trend for regional and artisanal products in Bavaria – the popularity of craft beers such as CREW ale for example, confirms this. Do you think this is one of the reasons that Mondino’s become so successful?

We brought Mondino back on the market because, quite simply, we couldn’t find a comparable product of similar quality. We wanted to make a bitter aperitivo that doesn’t taste of flat industrial goods – rather one where you can taste the freshness and complexity – which comes from using the freshest ingredients and elaborate production methods. This is of course both time and cost intensive. As we’re using largely fresh ingredients, the taste of each batch can vary – meaning each batch is unique. The reaction from our customers and from bar tenders shows that there’s definitely more of an awareness of handmade quality. At the Craft Spirts fair “Distille” in Berlin, we’ve just won the audience award for Best Bitter, which pleases us immensely. Are you in contact with other distilleries in Bavaria? Are they supportive of Mondino?

A lot of exciting things are happening in the field at the moment – not only in distilleries, but also with regard to soft drinks. The guys from Aqua Monaco, for example, are good friends of ours, and we work together from time to time – also because our products fit so well together. And also outside of Bavaria there are some interesting new brands, such as Belsazar vermouth from Berlin. And we also work together with breweries – such as the team from CREW ale. In the Weisses Bräuhaus in Tal, Munich, you can order a Grieser Spritz – wheat beer with Mondino. It sounds peculiar – but it’s tasty!

Mondino is currently sold in online shops across the country – did you expect it to be so successful?

We are overwhelmed that Mondino’s so well received. We’re currently expanding our production, as we have enquiries from all over Germany – and sometimes from abroad. We’re super busy at the moment – and it’s great to see that so many people are enthusiastic about our product.

What are your visions for the future of Mondino? Can we expect new liqueurs from you?

Right now we want to concentrate on Mondino. Of course, we’d like to open up new markets and expand sales, but the quality has to be perfect. Thus, it’s possible that we cannot manufacture because an ingredient – of the right quality – is not available. Here, we refuse to compromise – only then can we ensure excellent products.

Where can we buy a bottle of Mondino?

Alongside online stores such as Barfish, you can buy Mondino in organic supermarkets – like Basic, Herrmannsdorfer and VollCorner, and also in the Pachmayr store on Theresienstraße. And then in bars – such as James T. Hunt, Charlie, Die Goldene Bar, the cafe in the Stadtmuseum and many other places.