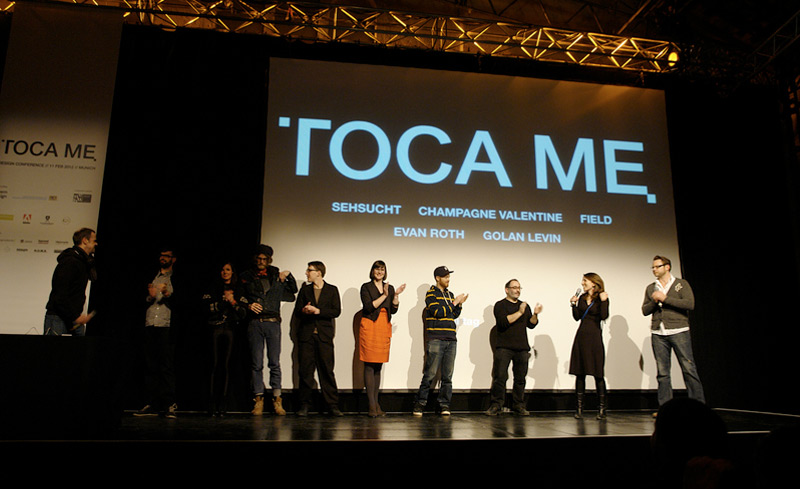 TOCA ME 2012 gathered together international designers at Munich’s Reithalle to share knowledge, ideas and inspiration. The key note speakers were a varied bunch – some, such as Mate Steinforth from Sehsucht in Berlin had their roots firmly fixed in a graphic design, advertising background. Others, such as Champagne Valentine were more focused on the artistic side. The running theme of the design conference was innovation – be it in terms of technology or simply embracing new artistic styles, and new ideas.

Before I go any further, a special mention has to go to Maxim Zhestkov’s opening titles – wonderfully put together.

Mate Steinforth kicked off the event at 2.30pm, after we’d all had a hot cup of coffee and the chance to warm up a little in the Reithalle’s lounge area. Steinforth, creative director at Sehsucht, discussed some of his most recent projects and gave those of us not involved in advertising, the chance to see how a TV spot is put together. One of the most impressive ads, in terms of the high-quality graphic design is their Lamborghini Aventador spot. I don’t even have a driver’s license, but this ad made me want that Lamborghini.

Next up were Champagne Valentine, an Amsterdam based art duo. The pair, from Melbourne and Texas, had also made various ads – including the recent Versace for H&M spots, but they’re focused more on the art side, than the advertising side. It was interesting to see how different people approach making an ad. Their art is abstract, colourful and wacky, and certain brands prefer this take on design as oppose to the sleek, refined work of Sehsucht.

Up next were Field – rather nervous, but thoroughly enjoyable. The pair work in London, and have produced installations for Deutsche Bank in Hong Kong, a music video involving contemporary dance for Stateless and 10,000 unique digital paintings.

Next, and my personal favourite of the day was Evan Roth, a fascinating and engaging artist who plays with open source, popular culture and the use of humour in activism. Many of his innovations are playful art – including this piece, entitled “How To Keep Motherf***ers From Putting Their Seats Back”. Roth reiterated the importance of digital art in today’s world – and how it can be used to benefit others. He used graffiti artist Tony Quan – aka Tempt One as an example – Tempt suffers from Lou Gehrig’s disease and as a result, is paralysed. Yet he wanted to continue to produce art, and Roth and several friends worked together to produce the Eyewriter, which allowed Tempt to produce graffiti art using movements of the eye. A fascinating, altruistic invention to help paralysed artists.

TOCA ME’s headliner was new media artist Golan Levin, famous for his cross-boundary work involving technological development and interactive art. Levin showcased his lab’s recent work into new forms of 3D cinema – which allows the director to choose the cinematography after the shooting’s over. As with Roth, Levin’s work is playful and fun – at the same time he’s establishing serious technical milestones.

All in all, TOCA ME was a huge success, despite the freezing temperatures outdoors. The event was sold-out, the post-conference party was a lot of fun, and a lot of the speakers hung around afterwards to chat to the audience.