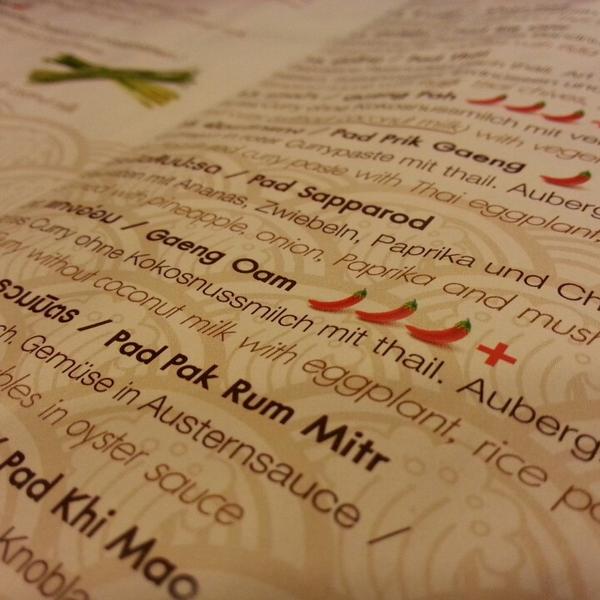 Manam is a tiny, boisterous, busy little Thai restaurant that could almost be in the middle of Bangkok…almost.

Instead, it’s a few doors up from True & 12 and Pizzesco, opposite the Gasteig in Haidhausen, and offers Munich’s most authentic Thai food. It’s not swanky – people perch on tiny plastic stools, others stand outside, hungrily anticipating their take-out and others queue (as much as this country does queue), trying to grab a seat the moment someone ups and leaves. There are no reservations.

Countless people had told me it was worth the wait and the jostling that goes on to nab a seat, and so I met up with Sasha there on a Tuesday night for dinner. Manam has a great, bustling atmosphere, and it was overflowing with hungry Münchners, hankering after good Thai food. After a twenty minute wait, we managed to grab seats outside, and salivated over the menus. I’d been warned that the food was fiery. The one chilli that designates a fairly mild dish on the menu was to be read as “seriously spicy”, which left me terrified as to what the “three chillies plus” dish was like. Somewhat intimidated, I stuck with “one chilli” and went for the red curry with Thai aubergines, chicken, green beans, and peanuts. I really enjoyed it. It was pretty darned spicy, and I had to blow my nose several times throughout dinner, but it was bursting with flavour, the rice was cooked to perfection and there was lots of tender chicken. Manam doesn’t use any flavour enhancers, and all of their ingredients are entirely natural – and you can tell. It’s hearty, homely, mouthwatering Thai food.

Oh, and you’re a hundred metres away from True & 12 – so dessert’s sorted too.