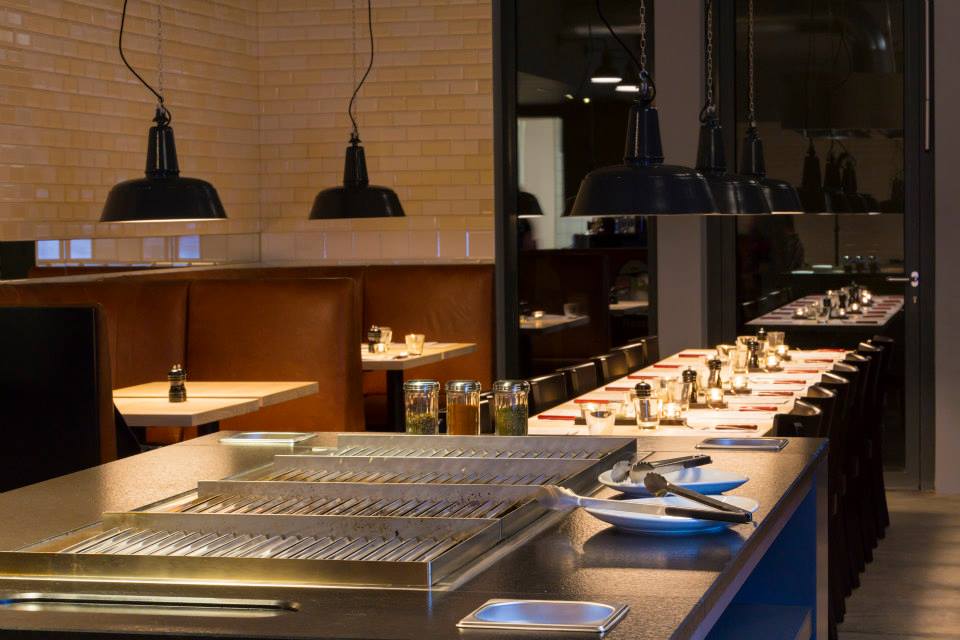 I cannot believe that no one thought of this as a restaurant name before now. Hell, I’d have opened a Grill & Grace myself, regardless of interest in grilled goods, had I thought of it. It’s an excellent name for a steak bar.

Grill & Grace opened in Munich’s Westend at the start of December, and is Germany’s first “grill your own” steak restaurant. I admit, I was dubious. When I go out to eat, I like to sit down, order a good bottle of wine and do nothing but chat, eat and drink. The thought of getting up after your starter to stand at a grill in the middle of the restaurant and cook your own filet to perfection is daunting. But Grill & Grace is just a thirty second walk from my apartment, so I decided to give it a shot.

The restaurant’s design is industrial – very sleek, very clean. It’s new, but I don’t think they’re going to change that aspect of the design. There are no pictures on the wall and there’s nothing personal about it at all. It is chic – vintage industrial lamps, American-style diner booths with brown leather seating and white tiled walls. And the menu design is hipster heaven. They even thought to include moustache graphics.

The concept was explained to us as soon as we were seated. You order your meal, and if it happens to be a steak, your raw steak will be brought to you in a brown cardboard carton. You’ll be handed a pair of tongs and shown to the grill hub, located in the centre of the restaurant. I spent ages trying to decide if I really could be bother to grill my own dinner or if I should order the kimchi burger instead. While I was deciding, we ordered aperitifs – I chose the sea buckthorn cocktail, as recommended by our waiter, and my boyfriend went for the Americano. Alas, my sea buckthorn fizz was bland, and F’s Americano was nothing compared to the ambrosial Americano’s Quattro Tavoli shake up.

After much deliberation, I decided I should give grilling a go, and went for the filet (26 €). I ordered fries and a salad on the side, and chose a sauce bearnaise and a herb butter to go with the steak. A few minutes later, my boxed up raw steak was in front of me, and I wsa told that the kitchen would finish preparing the rest, I just needed to give them a heads up around five minutes before my steak was done. You’re provided with a stop-watch and (thankfully) a waiter to guide you through it all. My thick filet was going to take around 7 minutes to be medium-rare, and this was pretty accurate. Oh, and if you’re a veggie, you can grill your own tofu! They have a separate grill, especially for vegetarians.

I plated up my steak, and no more than two seconds later received my fries, salad and sauces. With the first bite, all apprehensions disappeared – it was bloody marvellous. It was high quality steak, the fries were thick, the sauce was wonderfully creamy and the only niggle I have is that the salad dressing was a bit dull. The rest of it was superb.

Grill & Grace also have some pretty good drinks to offer – I drank a decent Primitivo, they have Sierra Nevada pale ale (one of my favourite ales) and they have a wide range of good gin behind the bar.

The steak bar also offers lunchtime deals, so if you work in the area, you can pop by for a hearty lunch (you don’t have to grill your own at lunchtime). Thursday’s burger day, and they have a different burger on the menu each time. Check out their Facebook page for up-to-date lunch deals.