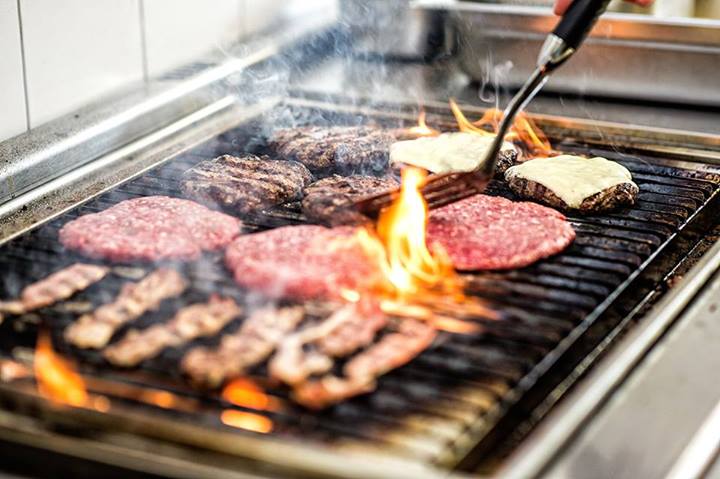 My burger group of three grew to eight last week, when friends started expressing interest in a good burger.

We headed to Die Hamburgerei on Briennerstr., not too far from Hauptbahnhof, which I passed on the way to the Lenbachhaus the other day. From the outside, it looked totally hipster, but cute – and the burgers sounded interesting. They have their own take on burgers from around the world, and there were some pretty wacky combinations on the menu – including a Bavarian burger with obatzda, a Mexican burger with tortilla chips atop your burger, and a Japanese burger, with bean sprouts. It was interesting, and I set about organizing a burger date.

So on Monday night, the burger group was rounded up and we headed out to eat meat.

We were sat upstairs, where it’s a little quieter. Once you’ve chosen your burger, you head to the bar to order. I went for the regular burger – with bacon and cheese, and with the chutney (gurkin-mustard chutney) on the side.

Annka had the vegan burger, a falafel combination, Pete had the Japanese burger, and Kyle had the Mexican burger. The others had variations of traditional burgers/vegan burgers. But the burgers were just waaay too big. The bun was pretty good, the beef was well cooked (medium), and the bacon was crispy. Burgers are messy at the best of times, but these were so big that I had to do the unthinkable and use cutlery on a burger. None of us finished our plates, and it was such a shame to have to throw so much good meat away. The gurkin-mustard chutney was also pretty intense, and I wasn’t a fan (I was glad I ordered it on the side to try). I’d most definitely go again, but I’d stick to a regular burger, order minus the chutney, and I’d get my fries to share – the fries are too good not to order, but with the burger, it’s simply too much.

It’s a cute idea though, and if you’re more of an adventurous burger eater than I am, it’s well worth visiting. The place itself is also lovely – they played good music, it was modern, the interior decoration was bright and cheerful, and service was good.