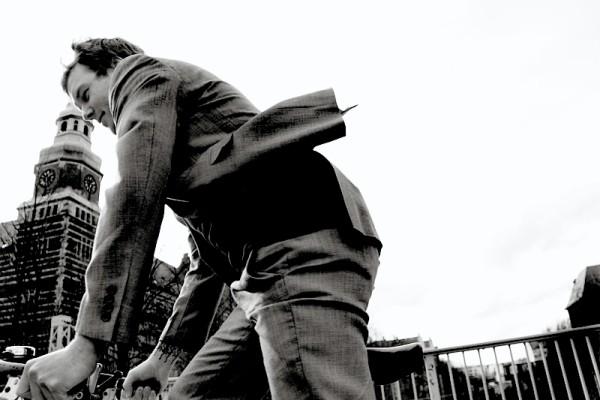 Nagel is somewhere between rock star and bookworm. I first came across him when he accompanied Irvine Welsh on his last tour of Germany, when they both read excerpts from Welsh’s novel Skagboys (Welsh in English, Nagel in German). The following year he was on tour with John Niven and his novel Straight White Male, and Caitlin Moran and dozens of other red-blooded women got all hot under the collar when Niven tweeted this picture of him.

In any case, Nagel was actually a rock star, fronting the punk band Muff Potter, before turning his creative talents to writing and art. His linocuts have been exhibited across Germany, and he’s released two acclaimed novels over the past five years.

A week today, he’ll be at Milla, presenting stories and images from his travels. Entitled Vielen Dank für die Blümeranz, the evening is set to contain jocose tales of Nagel’s trips across the world. Images will be projected onto Milla’s brick walls, accompanied by anecdotes and wine. If the idea of a book presentation makes you suppress a yawn, I can guarantee an evening with Nagel will be relaxed, amusing and a little bit boisterous. I caught up with him to talk about his gig next week in Milla, other current projects and what we can expect from him in the future. You’re probably best known for playing in the band Muff Potter – but you’re also an artist, a graphic designer, an author and accompanying reader with the likes of Irvine Welsh and John Niven – how do you find the time to do everything?

Actually, there are long stretches of time when I’m not doing anything – or I’m working on something and just don’t manage to get it done. I guess a lot of artists know these phases of either too much happening at once – or nothing at all. Although it’s depressing at times (or puts me in a state of mania at other times), I’ve somehow got used to it – what really helps is alternation.

Last year, for instance, I was struggling with different ideas for a new novel. As way of procrastination, I started doing new linocuts – which was actually quite a creative method of procrastination. Throughout those lonely nights of drawing and cutting and printing, ideas for new songs kept popping into my head, and I started writing them down. After a while, I got sick of the tight corset of lyrics, and couldn’t wait to start work on the novel or some travel stories again.

This may sound quite unstructured – and it definitely is, there’s lots of trial and error and hopping to and fro, but it’s the only way I can work. When I’m stuck, it makes no sense for me to try harder and harder, I need to let go, to do something else and perhaps return to it later. I’m easily bored, so to keep things interesting, I need these different disciplines.

What almost always helps is leaving the house, going out, seeing places and meeting people I didn’t know before. Travelling and touring. I guess that’s what inspires me the most.

Are you still making music with your eponymous band Nagel? Can we expect some new stuff in the future?

We’re in the studio right now. Finally! Still, it might take some time before we release an album. I was playing in Muff Potter for sixteen years, and after we broke up in 2009, I didn’t want to rush things, but rather take my time – until I was sure I had something that was worth pressing onto vinyl. There are enough musicians around that keep making new records, just because they don’t know what else to do. But yeah, I’m excited. After all these years mostly working alone, it feels great to be a part of something bigger again.

Can you tell us a bit more about Vielen Dank für die Blümeranz? What gave you the idea to combine your photos with tales of your travels?

To make the readings for my first and second novels more lively, I started to show pictures of funny stuff I found on my travels. It also helped distinguish them from your typical, rather dull book presentation. And that always worked pretty well for both me and the audience. I truly believe that readings should be entertaining and fun. I reject this very German concept of so-called E- vs U-Kultur (Ernst vs Unterhaltung – the idea that highbrow culture and light entertainment are two separate entities).

Then I realized, I had these huge files of cool pictures – weird stuff I’d seen, stupid graffiti I found on walls and a lot of funny anecdotes to go with them. So I did a tour with these photos and some columns that I’d written for different magazines – and someone said I should make a book out of it. And that’s what I’m working on right now. All the stories I’ll be reading at Milla are unpublished so far.

A nice side effect is that while touring, I collect stuff for the book. It’s become this machine that feeds itself.

And what’s next on the horizon for you?

I’ve been working on a lot of different things at once over the past two or three years, so besides the readings and exhibitions, I hope there will be a photo and story book soon. And then the first album from my band Nagel, new linocuts, and maybe even a new novel.