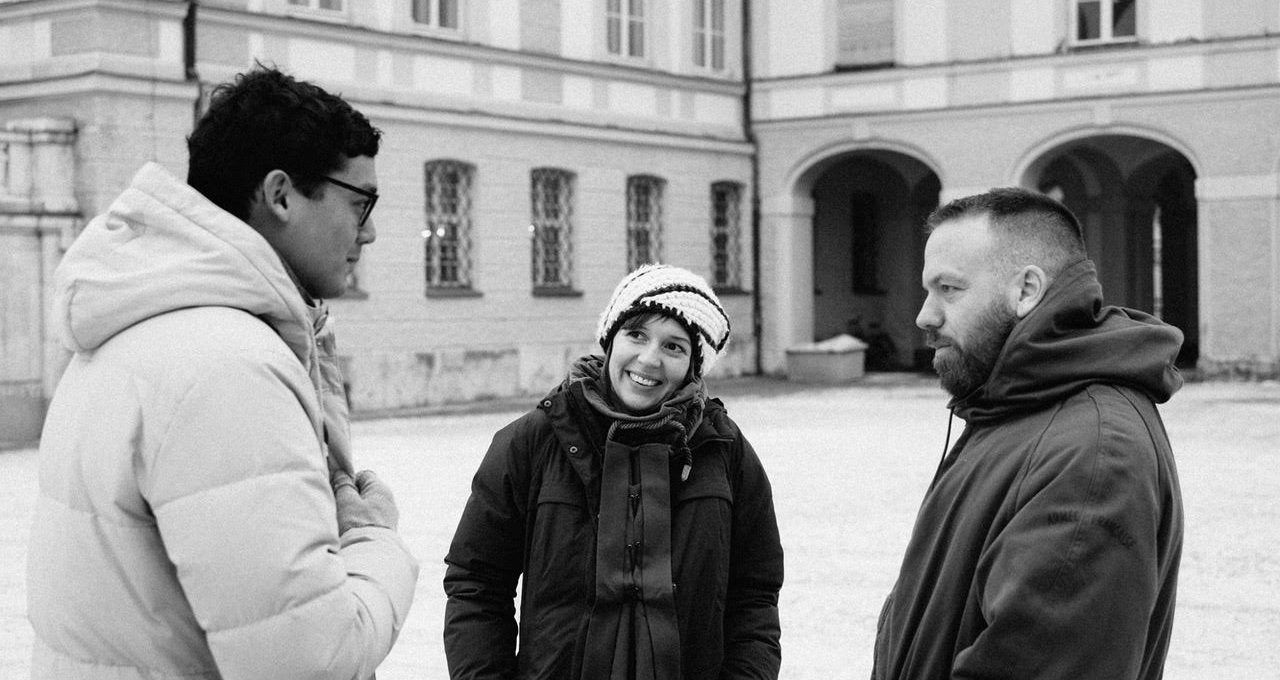 This is the second in a series of interviews in which I speak with some of Munich’s creative Zuagroaste – people born elsewhere who’ve made Munich their home. The questions will always be the same, but the people, their backgrounds and their passions are all very different.

This week, I spoke to Bryan Banker, one of the founders of Wolkenschlösser (cloud castles). It’s a project that aims to support the mental wellbeing of refugees. There are many Munich groups that deal with the practical side – supporting refugees with housing, clothing and other necessities, and Wolkenschlösser decided to focus on their mental welfare, offering creative writing and art workshops for refugees in Munich.

The goal is to assist refugees in telling their story – through whatever medium they choose to use. With this opportunity of self-expression, Wolkenschlösser aims to help young immigrants process the trauma of war and exodus.

They start by helping the refugees learn German, so that the refugees can navigate their new life in Germany, but also so that they can discuss any distressing experiences that were encountered in coming to Germany. Workshops are offered – local authors, translators, lecturers and teachers are invited to help the refugees discover the playfulness of language, and it offers them a chance to discover their creative side – an opportunity to play around with language, and have fun with what they’ve learned. What drew you to your job, and why did you choose Munich?
I came to Munich from Heidelberg a few years ago to study. I am doing my gradate PhD work in philosophy and African American art and culture. After living Heidelberg, I was looking for a bigger city to live and work in. Munich is also perfectly located in Europe for travel as well. The university, though, LMU-Munich, is ultimately what brought me to the city.

How does Munich differ to where you’re from?
There are, of course, many differences between where I lived in the US and here in Munich. I don’t really have a “home,” as my family moved around quite a bit growing up. But to compare Munich to where I have lived previously, I think the biggest difference is mentality. Munich, although fairly big for a European city, still retains a small-town mentality. When I arrived, I thought, as a bigger city, I could adapt, meet people quickly and get friends and so on. However Munich, in this exclusive mentality, was a bit difficult to navigate. Took a while, but now I do enjoy life here. Still doesn’t feel like a “home,” however. I wonder if it ever will…

If you weren’t living in Munich, where would you be?
I’d definitely want to be in a bigger city. Normally, this would be an easy question – as I would say Istanbul, my very favorite city in the world. However, in light of the tremendous political turmoil that is facing Turkey these days, it would be difficult say so now. I feel like I need a big city, with lots of diversity, lots of cultural activities, a mash-up of many different people and culture and things. I’m fascinated by identity, how and what shapes people, their culture, their living spaces. So I love cities like Berlin, Barcelona, Marseille, Stockholm, and Paris, among others, because of the incredible mixing of so many elements. That is where I want to go, to one of those places.

What does Munich lack?
This is a tough question, in a way, as I think Munich has much of what so many would want or need. I’ll say inclusivity, though. Whereas the city came together in such beautiful ways, standing up against racism and xenophobia last year, however, more inclusivity is necessary to avoid for future strife. And not just ethnic or cultural inclusivity, but also across class boundaries as well.
Plus, inclusivity will make more people feel welcome, in general, to such a beautiful city!

Do you have a favourite district in Munich?
There are a few places I really like in the city. I really enjoy the area around the university, Maxvorstadt, with all the cool shops, restaurants and so on. Schwabing is also quite nice. The area around Sendinger Tor, Glockenbachviertel, is hip and nice as well. I just wish more of Munich was more affordable!

Favourite place for a coffee?
As I am often at the university or state library, I really like to pop into Café Schneller for a delicious cappuccino and a tasty pastry. Mahlefitz is also a great place as well. I’m a novice at coffee-drinking, though, so I’m not the best person to ask. I only started drinking coffee last year, (but wow, has it helped with the focus and writing)!

Any hidden gems you’d like to share with us?
I don’t want to share then everyone will go to my favorite “secret” places! But I would be remiss to not mention one of my favorite restaurants in the city, Sara Grill. It is Lebanese/Arabic cuisine and absolutely the best grilled meats in the city!

How do you like to spend your free time?
I don’t know what free time means these days… I am in the final throes of finishing my PhD; so much of my time is spent at the library writing my dissertation. However, I love music. I spend time walking the streets, listening to music. I also like going to live shows. When I can, I travel or watch movies with my nerdy film-friends, and watch television online (I’m a sucker for a good TV show).