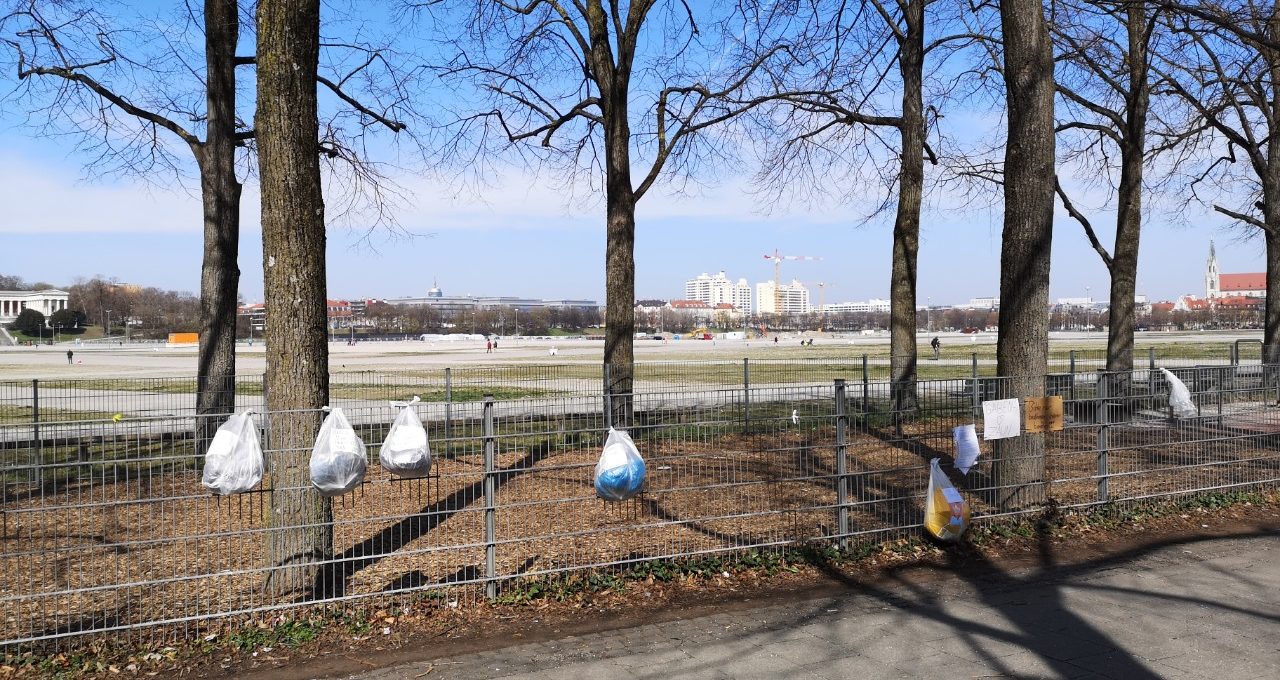 Together with some fantastic Munich activists, my dear friend Mona Walch has set up “Gabenzäune” around Munich. These are spots where people can leave bags full of provisions for those in need, at a time when many institutions have had to close their doors.

The coronavirus has meant that being homeless in Munich is now even harder, as the SZ reported last week. Caritas has had to close its food banks as a result of the coronavirus, donations are few and far between as people stay at home, and shelters have had to reduce their regular program to protect both volunteers and the homeless people they support – they’re offering care parcels, but no longer hot meals and a place to rest, as previously. As a result, the Gabenzaun project is a crucial helping hand for many right now.

The website has a map of current locations – seek out one nearby, fill up a (ideally plastic – weatherproof!) bag full of provisions, label what’s inside (food/toiletries/female hygiene products/blankets/etc) and take them to one of the donation fences, where you can hang it up. People who need various items can then come by and pick them up.

Mona’s currently working on the One Young World summit with Munich’s authorities, and has the kind of connections to city authorities that’s meant she’s been able to get this project up and running very quickly. She was in quarantine the whole time, so setting up the dozen or so Gabenzäune has been no mean feat!

I spoke to her about setting up the project, and how she got it on its feet quite so quickly. “I’d read about these donation fences in Berlin and Leipzig, and thought it was a fantastic idea. I thought about a men’s hostel close to my house, and there’s an emergency shelter fairly close by too, and realised that it was a terrible situation for those that are no longer able to go to lodgings like that.”

Mona considered her connections. “The founders of Westpark’s Cafe Gans am Wasser are currently building Gans Woanders, in the Pilgersheimerstraße. It’s pretty much next door to the men’s hostel there. I wrote to Julian Hahn (the founder), and asked if it would be OK if I were to create a Gabenzaun – a donation fence – on the fence that surrounds the building site at Gans Woanders. He was more than OK with it, and put me in touch with one of his colleagues, Catarina Dauzenroth. As I was in quarantine, she prepared the posters and info sheets for it.”

It didn’t stop there. Mona contacted Jakob Kijas, who founded the Eksystent film distribution company to ask if he could pick up the posters and info sheets, and hang them up. “Then, I thought it would be a great idea to coordinate it all with a website – there are a lot of people in Munich who want to create these Gabenzäune – and if there was one map with all of the locations, those in need could find them easily, and people donating could do the same.”

Mona spoke with the local health office, the Münchner Tafel (who has a reduced service at the moment), and the Kältebus, and determined that they could use a website with consolidated information to pass on to the people they’re in touch with. Jakob Kijas created the website in a night, and together, the three of them (Mona, Catarina and Jakob) work to keep the website up-to-date and answer any questions via email.

“It’s wonderful how it sprang to life, and it’s so great to see people reacting so positively – so many Gabenzäune are now dotted around Munich,” Mona says. However, she emphasizes the importance of responsibility. “People should take care of these spaces – tidy up, make sure that there’s no rotting food lying around, and so on. These spaces have to be managed. And if you want to create something like this, you obviously have to speak to the owners of the fence.”