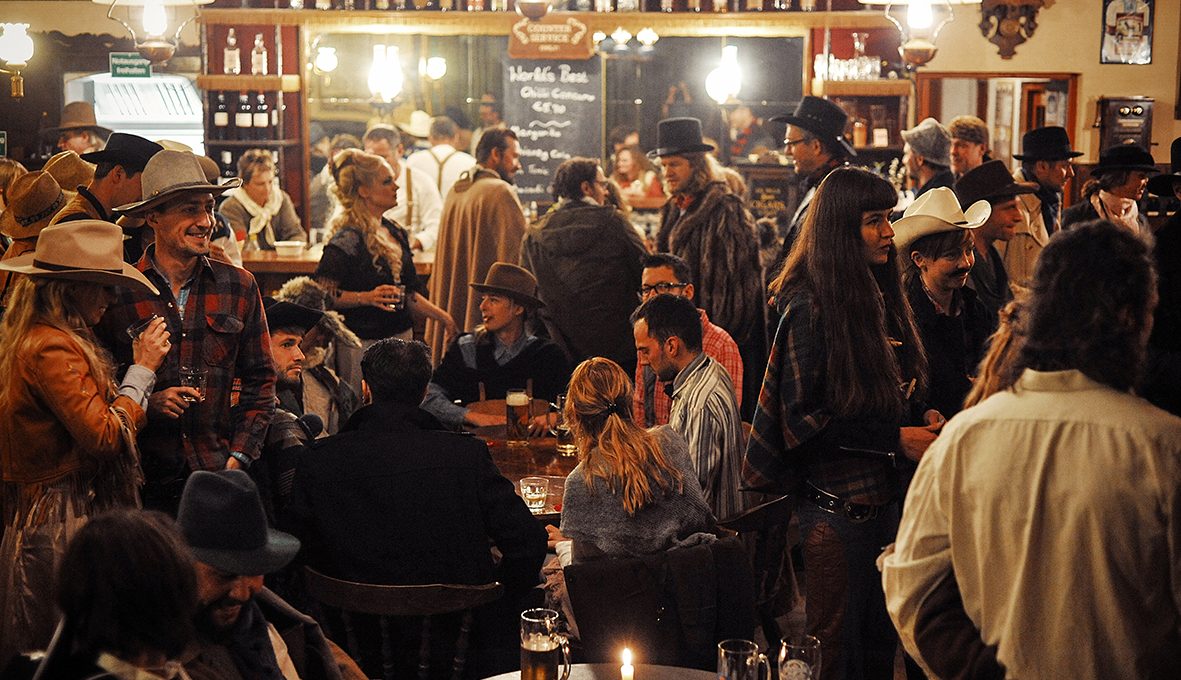 On Sunday evening, I dug out a plaid shirt, turned a neighbour’s skipping rope into a lasso, borrowed an original Texan cowboy hat from a friend and loaded my plastic Colt with ammunition. Information received a couple of days previously informed me which U-Bahn exit I needed to be at, where I was greeted by two delightful hostesses, ready to whisk me off to my destination. A few minutes passed, other cowboys and cowgirls arrived. Then, we were led to an unmarked vehicle, which sped through the streets of Munich to our secret FilmTrip location.

My group was one of the first to arrive. We handed in our phones and cameras in return for a Colt, and headed indoors to warm up. “Hm…I smell horses”, one guest noted. “We’re in the Wild West. It would be a little peculiar if you couldn’t smell horses”, our host responded wryly. The saloon’s bar had propped up its first punters, and a civilized blackjack game was underway. Before anyone could get too comfortable, we were taken to the back room, where we met the ominous black cowboy and learned our roles.

From then on in, we were all in a Western. The bar served cola, margaritas, whisky and beer, and chilli con carne was on offer to feed hungry outlaws who’d had a particularly busy day avoiding the sheriff. I settled down to a few blackjack games, sipping whisky between rounds. On stage, a band played rockabilly, surrounded by adoring fans. Every now and then, a gunfight would interrupt affairs, but the dead cowboy would be carried out and the dealer would resume his seat.

To avoid spoiling it for others yet to attend FilmTrip, I won’t go into too much detail as to what else happened, but it was rambunctious, rowdy and action-packed.

The film on which the event was based was shown at the end of the evening, but, with fifty fully grown adults fully immersed in their roles and each with a plastic revolver and plenty of ammunition, guests were still very actively particpating in a Western.

FilmTrip will run until November 9 and tickets (30 €) can be bought online. You can also sign up for their newsletters so you can plan your next FilmTrip in advance.