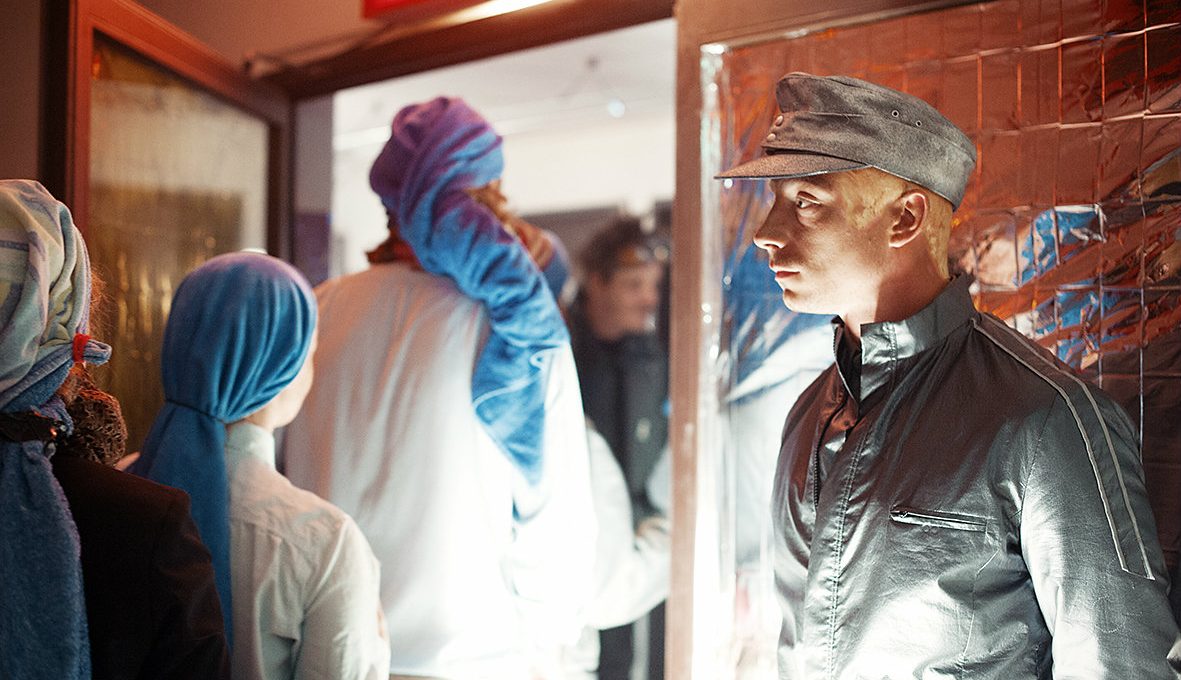 FilmTrip #003 rounded up their action-packed, intergalactic feast last night, following twelve nights of role play at BieBie in Freimann. I hope my last post about FilmTrip inspired you to don your best neon jumpers and floral shirts for the eighties-inspired evening, but if you didn’t get round to it this time, sign-up to receive FilmTrip’s newsletters so as not to miss the next event.

This time, the film in question was Total Recall, the Schwarzenegger 1990 classic based on Philip K. Dick’s story We Can Remember It for You Wholesale.

A week before the event, we received our roles: name (Ella Collister), year of birth (2054) and function within the firm Biering Intelligent Resource Management. I felt slightly smug to have received a very positive employee feedback. We arrived at “work” (BieBie, at Freimann) at 8:20pm, to start our shift. We handed in our phones, keys and other personal items – items unnecessary for the long shift ahead of us – and checked the company guidelines. We were to carry a hand towel with us at all times, for hygiene reasons; we were to have short, unpolished nails and hair was to be tied back if long.

We started our shift with a group photo – before being sat down and told to disassemble old electronic parts. We spent five minutes hammering, unscrewing and cutting old radios (some with more enthusiasm than others, particularly when it came to hammering), and sorting parts into piles: cables, plastic and other waste, before a buoyant, enthusiastic gentleman entered the room and asked if we fancied a trip to Mars. We’d be away just thirty minutes, he promised, but it would feel like two weeks.

We considered our prospects: A lunchtime trip to Mars, or mashed potato in the canteen? Mars it was.

We were rushed into a room where we were to be transferred into an intergalactic world. We were given syringed shots of medicine (schnapps), to help us head to the other world. But then, all of a sudden – the machine failed. Alarm bells rang, smoke billowed through the room. “OUT, get out, something’s gone wrong!” screamed the professor in charge – and promptly rushed us off to another area. We were chased by suspect beings on motorbikes (one of our party was captured), and we had to roll under an iron gate and head underground to save ourselves.

After faking our IDs and binding towels around our heads, we headed to Mars in a shuttle. We were interrogated at the border – thankfully when the questions got too intense, one of our party used an explosive agent to “eliminate” the border control guards, and we slipped through unnoticed. We checked into our Hilton hotel on Mars, and headed to the bar with M, a stoned, spaced out (pun intended) “good guy”.

He took us to the bar to the prostitutes, the “rebels”, where we met the lady with three breasts:

All too soon, we were sent out to look for some clues – we needed to save the planet. After much rumaging, we found a phone and our photo in our hotel suite, and headed to the bar to help solve the riddle. We puzzled over the answer for a good ten minutes, but were interrupted by the soldiers – the bad guys. A wild battle ensued – thankfully, we won – and the party began.

The event is curated by passionate locals, and the attention to detail is astonishing. Sign up for the next Filmtrip, and tell your friends!